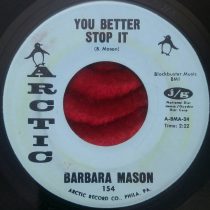 This lovely tune was slaughtered by several Hip Hop artists, don’t like none of the results but choose yourself

“Founded by WDAS program director/deejay Jimmy Bishop in conjunction with Jamie/Guyden Records in 1964, Arctic Records was one of Philadelphia’s most important early soul labels, greatly influencing the subsequent rise of Philly soul.

Barbara Mason’s classic Yes, I’m Ready was the label’s biggest seller in 1965; she quickly became Arctic’s flagship artist. Kenny Gamble gained invaluable experience at Arctic, not just as a songwriter and producer but as a smooth-voiced singer. Arctic hosted the Volcanos and the Ambassadors, two of the City of Brotherly Love’s finest male vocal groups, and the sexy, sultry Honey & the Bees. Daryl Hall got his start at Arctic as lead tenor with blue-eyed soulsters the Temptones; Della Humphrey’s debut Arctic single hit when she was barely in her teens.

This is a notorious classic from the 90’s Acid Jazz days, I heard it first in a club when Kevin Beadle came over to our Munich Into Somethin’ clubnight in ca. 1992/1993. Soon after it was featured on the iconic compilation “London Jazz Classics” that was done by Stuart Baker on his Soul Jazz Records label. Released on the 1972 self titled LP feat. Larnelle Harris the 45 seems to be unusually rare.