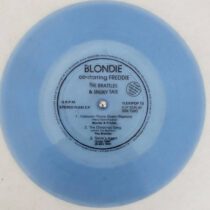 Merry Christmas everyone! This is a giveaway flexi disc that was attached to a short lived UK music magazine in 1981. This Flexipop magazine was run by some ex Music Mirror folks and held one of such flexidiscs with exclusive tracks (as by The Jam, XTC or Motorhead for instance) in each issue. There seem to be vinyl test pressings that are quite rare & sought after, although the quality of the flexidisc ain’t too bad at all. The artists credit says “Blondie And Freddiy”